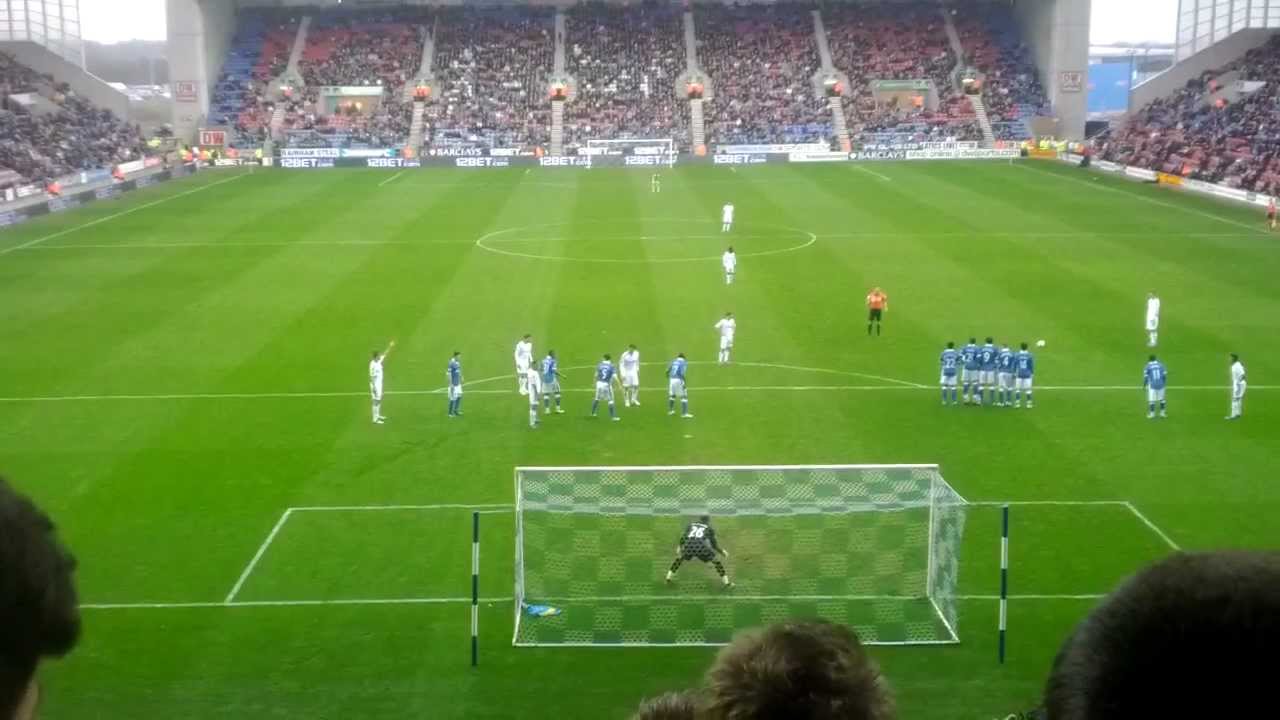 This is Icelandic midfielder Gylfi Sigurdsson’s second goal at the DW Stadium for the Swans – a free kick which wrong-foots the Wigan keeper, Ali Al Habsi, on 54 mins, as filmed from the North Stand.

Brendan Rodger’s Swansea City were impressive 2-0 victors that afternoon against a woeful Wigan Athletic side who were rooted to the foot of the Premiership and looked doomed to relegation having only won once at home all season at that point. As it turned out, the Latics’ form suddenly improved after this match, as Roberto Martinez’s side went on to beat the likes of Newcastle United and Liverpool at the DW and secure unexpected wins at Old Trafford (Manchester United) and the Emirates (Arsenal) to climb up to a relatively impressive finish of 15th – a clear seven points above the drop-zone. It is said that the Wigan chairman, Dave Whelan, “had words” with the players and management after this terrible display back in March and that may have sparked the amazing turnaround in their on-field success, winning seven and drawing two in the last eleven matches after this low point. The end of season results and ultimate comfortable survival in the top tier of English football did much to enhance the reputation of the former Swans player and manager, Roberto Martinez, and led to his name being considered to replace Kenny Dalglish as Liverpool’s manager. His counterpart on this day, Brendan Rodgers, had made himself a reputation throughout the season, with his side playing attractive football and claiming the scalps of the well-established “big boys”, including Manchester City, Arsenal and Liverpool, in their first season in the top flight since the early eightees. They eventually finished the 2011/12 campaign in a respectful 11th spot. The Northern Irish manager would also have his name thrown into the hat for the vacant job at Liverpool’s second best team (check the final 11/12 league positions for clarification) but he was quick to distance himself from the prospect. Both teams and their respective managers, whether they remain at their current posts or not, will have much to build on in the 2012/13 season. (RGJ – 19/05/2012)

30/05/2012 – Upon hearing the devastating news today that Rodgers has agreed to join the shite, despite initially instinctively snubbing their advances, it seems this was the final time I’ll cheer when one of his teams score – shame, I actually had some respect for the bloke! (RGJ)

If you listen very carefully at 0:25, you can hear my “two nil” prophecy just before the kick is taken, as well as some useful advice from a nearby fan – “get it in the net”.
The clip also includes the incredible suggestion that the former Swan loanee, Jordi Gómez (whose foul resulted in this free kick), achieves sexual gratification through solo endeavours.