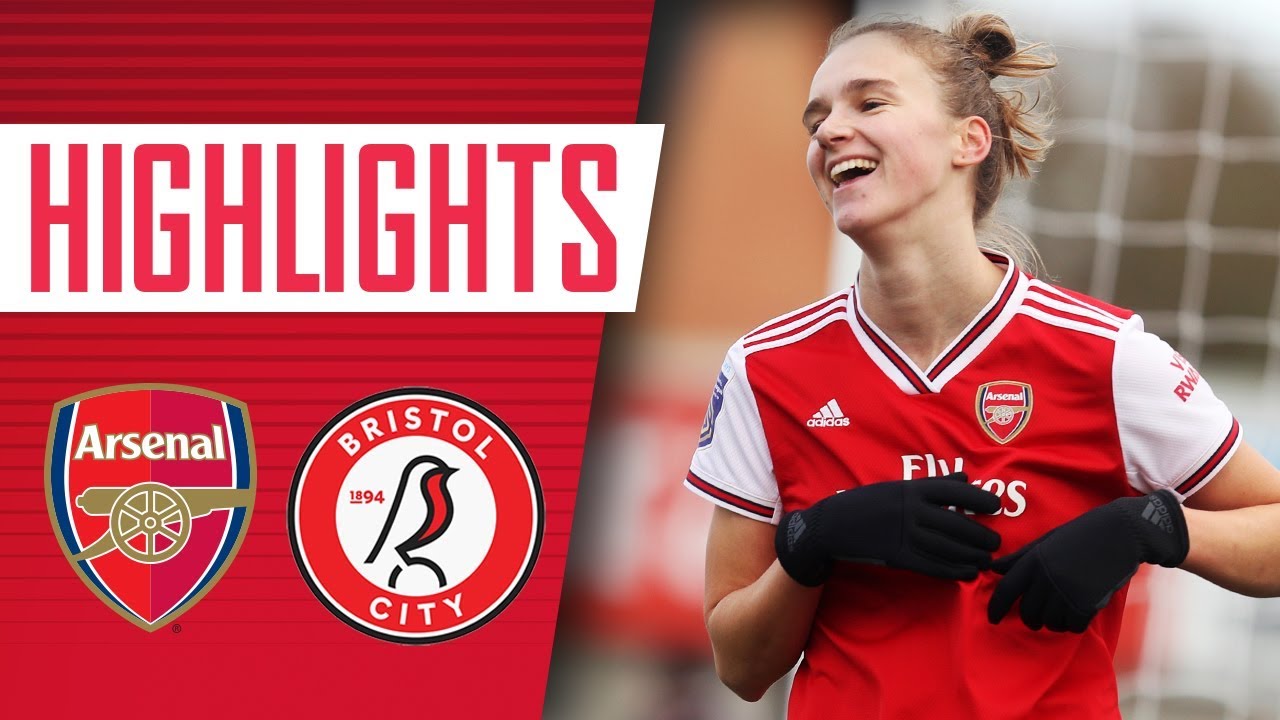 We recorded the highest-ever winning margin in FA Women’s Super League history as we hit 11 past Bristol City on Sunday afternoon.

Vivianne Miedema scored six times, which is also the most goals scored in a single WSL match by an individual – bringing her tally up to 22 goals in 13 starts so far this season.

Lisa Evans gave us an early lead when she popped up at the back post to head Beth Mead’s whipped cross home from close range.

We then extended our advantage moments later when Miedema broke down the wing and crossed the ball into the box, before Leah Williamson rose highest to power a header past Sophie Baggaley.

City’s keeper then made a fantastic save to tip Jordan Nobbs’ effort from the edge of the box on to the bar, but the joy was shortlived when Miedema controlled well inside the box before firing low into the corner shortly after.

Miedema scored her second, and our fourth, after 33 minutes when a ball played low into the box evaded the Robins defence before our prolific striker tapped home at the far post.

The Netherlands international then completed her hat-trick two minutes later when her initial shot from inside the six-yard area was saved, but the rebound fortuitously struck her before trickling into the bottom corner.

The visitors came close to pulling a goal back early in the second half when Yana Daniels controlled well on the edge of the box before seeing her strike crash back off the crossbar.

Miedema then netted her fourth of the match when the ball broke to her inside the box, she took a touch before firing into the top corner.

Our seventh came courtesy of Jordan Nobbs who ran on to a Mead cross from the left and made no mistake from close range, and Miedema then made it eight when she swept Evans’ through ball past Baggaley.

Minutes later, Miedema turned provider when she broke down the left and skipped past a challenge before finding Evans in the box, who grabbed a brace with a cushioned volley.

We then reached double figures as Miedema bagged her second hat-trick of the match as she collected the ball on the edge of the box, cut inside, and curled an effort into the bottom corner.

Emma Mitchell came off the bench and made it 11, after Evans had beaten two players and teed up the defender, who slammed into the roof of the net from just inside the box.

Bristol City were awarded a penalty in the closing stages when Manuela Zinsberger brought down Daniels and despite our keeper saving the initial effort, the forward slotted home the rebound.

For more match action, highlights and training videos, make sure you become a digital member and sign up to Arsenal Player. It’s FREE and is the Home of the Game:

This is the Official YouTube channel for Arsenal Football Club. This channel will aim to showcase the personality of Arsenal Football Club and give fans more of an insight into what it’s like to be at this fantastic club. This channel will look behind the scenes and get closer to the likes of Mesut Ozil, Pierre-Emerick Aubameyang, Henrikh Mkhitaryan, Alexandre Lacazette, Bernd Leno, Granit Xhaka, Hector Bellerin, and more.